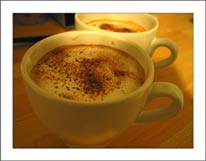 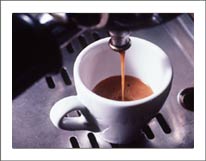 We all know coffee gives a kick. Other than helping you stay awake and tackle that boring desk job, it also prevents muscle wear-out. Caffeine pumps you up with energy. It improves brainpower, as in calculating and word building.

Simply put, it rejuvenates you, says Sudipta Sengupta, Senior General Manager of Cafe Coffee Day. Moreover, caffeine contains a chemical called Theophylline (found in black tea), which is a medical aid in respiration. She says, Every now and then. One cup in the morning and one after lunch (to drive away that drowsiness that comes with a full stomach). and recommend Cappuccino atleast twice a day.

Around the 6th century, a Muslim sage, Baba Budan, traveled to Arabia, where they strongly protected their bean. He managed to smuggle a few coffee grains into India, and planted them in a cave on what is now known as the Baba Budan Hills, in the Western Ghats of Karnataka. Slowly, the crop spread and engulfed the whole of India in its aroma. Earlier, it was only intellectuals and students who frequented coffee homes. Now, almost everyone does.

Owned by V.G.Siddhartha, Cafe Coffee Day (CCD) set up its first outlet in Bangalore in November 1996. India is primarily a tea-drinking country, but the coffee revolution was inspired by the cyber revolution, as in the concept of cafes. The CCD sources its coffee from their 10,000-acre coffee estate in Karnataka, besides Columbia, Ethiopia and Kenya. It has a Rs 300 crore turnover with highest sales during New Year's eve, Valentine's Day and Friendship Day.

"We have a partly-fixed and partly-changing menu which varies with season and region," informs Sengupta. These include pizzas, burgers, Veg. Submarine, wraps and Kathi rolls. Today, CCD has outlets in 60 cities, besides their 70 Express stalls in Delhi, the kiosk service at malls and petrol pumps that serves an interesting assortment of snacks and beverage- Hacky pizza, Dum Mast Express (Bombay style tea), Murgh Mast, Express V, P, C Dummy Burgers (V- Veg; P- Paneer ; C- chicken) and Nimbo Tangri, all priced between Rs. 12 to 30.

The favorites here are the Masala Chai and Cafe Frappe. Sudipta says that the elders prefer Almond Frappe as an after dinner coffee-and-dessert ritual. "The CCD is an all day place", she sums up. They target to open 350 cafes in India by June 2006. Nescafe The Barista chain of coffee parlours started 5 years ago, and today has 120 outlets across 20 cities. It is owned by the Sterling Group of Chennai, headed by Shivshankaran. Earlier, Tata Ltd. had a 1/3 share but later it disinvested.

"It is a great place for business meetings", says Surja Meher, its Marketing Head. "We serve light snacking like cookies, sandwiches and the Chocolate Excess which is a favorite original product", he adds. Among beverages, the cappuccino is a hit with the older people while the cold coffee is the youth best seller. Their coffee comes from across the world, from Bangalore to Costa Rica. A specialty feature is the tea they serve, with very little variety but a great experience, as in forms of fruit infusion: Raspberry and Blueberry tea.

"We plan to have 50 more outlets in the next 8 months", announces Meher. A coffee bar with a very different ambience is Mocha. "We have low chairs, high chairs, sofas, floor seating and even converted airplane seats into eclectic furniture to give a Moroccan feel," says Pareena, the public relation manager. The Mumbai-based chain is owned by 31 year old Riyazz Amlani, a funky guy, a backpacker.

They also have a whole-day breakfast menu with 14 types of omelets, besides muffins, pies, Paninis (Italian grilled breads), Poutine (French fries with cheese sauce), whole-wheat wraps, salads, Keema Ghotala, maggis and other exotica. In teas, there is English breakfast tea, Camomile tea and Masala Chai. Prices here start from Rs 20. Another striking specialty is the Hukkas with 24 to 26 flavors. But the most unique feature is that they have a Theatre and Art club, besides a bookshop.

"I do tarot-reading and salsa, too. During the tsunami we did theatre with the imagery of water", says Satya, Mocha's Manager. While coffee houses are meant to be open round the clock, none of the above mentioned cafes are 24 hours open because of Government laws. Only a few coffeehouses in some hotels have the license for all-day-all-night functioning. Also, the cafes do not experience any fall in sales vis-a-vis winter/summer, as they have both Hot and Cold menus, and season specials. Hot or cold, in colas, black tea or chocolate, in any form that pleases your taste buds go for it!

Did you know that coffee is the second largest traded commodity after petroleum? So how much of coffee is too much? Well, more than 3 cups of coffee a day can cause addiction and health problems. Nevertheless, people with a passion don't care! "How much coffee you should have depends on your activities. I have around 5 or 6 cups a day!", says Surja Meher, Marketing Head, Barista.

TOO MUCH, TOO BAD

Having too much caffeine over stimulates nerves and causes restlessness, irritability, headaches, diarrhea, insomnia and even cancerous fibroids. Persistent use of caffeine overexerts adrenal glands and thus harms them. Caffeine intake is a vicious circle with varied problems accompanied.

WHEN YOU KNOW YOU'VE OVERDONE IT!

You often feel depressed for no reason. Your body goes into tremors, feeling shaky. You get frequent heart-burns. You feel dizzy and fatigued. Your blood pressure and heart rate shoot up· You discover your cholesterol level has risen and power of concentration gone down· You start bed-wetting. If you're truing to solve the problem by drinking decaf, make sure the caffeine is removed by steam distillation (as in Water process or Swiss process), and not by chemical processes in which harmful residues like Trichloroethylene or Methylene chloride are left behind.

Headache (concentrated at the temples or at the back of the head or at the eye area), cramps. Extreme craving. Feelings of temperature fluctuation. Running nose. Dizziness, nausea and vomiting. Laziness, tiredness and depression. Ringing in the ears. Irkness, anxiety and nervousness. Poor concentration and disinterest. Constipation For some, it's just a way to burn the midnight oil with style! For others, coffee habit is synonymous with morning sunshine.