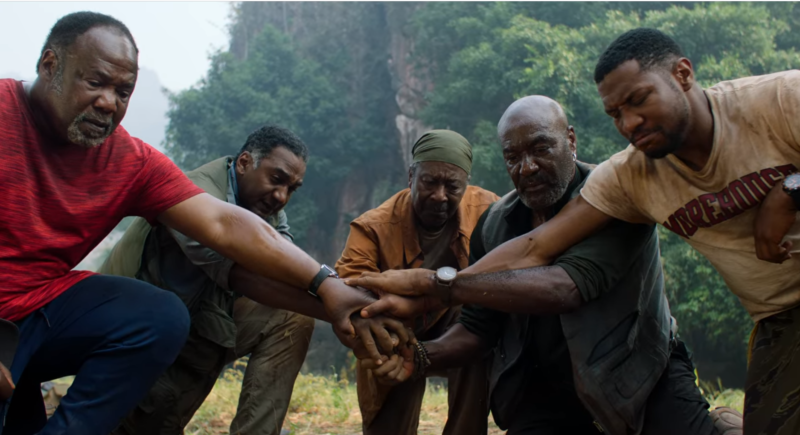 After the success of his last film, BlacKkKlansman at Cannes and the Oscars, Spike Lee returns with Da 5 Bloods, a war film. It’s about a group of African-American veterans called the “Bloods”who happened upon a case of gold during their tour in Vietnam and return after 40 years under the pretext of exhuming their squad leader’s body to find the gold.

While the plot of looking for gold seems to be the main focus, it’s not truly important. It has been added to give the film a commercial twist, a way to catch the potential viewer’s attention. Lee has learnt the art of combining important messages with the art of storytelling, making it so, that his works are not didactic, but still allows the viewers to get the message that he has integrated into the film. While on the surface, Da 5 Bloods is a heist movie, with the Ocean 11-esque suspense, thriller and drama, there is also an undertone of racial discrimination and inequality made evident through the brilliant direction of Lee. We even see a parallel between the Vietnam war and how it affected its citizens and racism in America with the footage of police brutality and racism used, supported by quotes from Angela Davis, Bobby Seale among others.

The film opens with an interview with Muhammad Ali who refused to enlist in the Vietnam war and closes with a speech by Martin Luther King Jr. who opposed the American involvement in it.Lee openly criticizes Hollywood movies that whitewashed soldiers as well as tried to win the “Nam war” on screen as they couldn’t in reality with the characters in the film making fun of “Holly-weird” while referring to the Rambo films and Chuck Norris. Instead of leaving it at that, Lee then gives a solution by making a film that allows representation of Black soldiers who were forced to fight in the Vietnam war - which was sorely missing from the vast repertoire of Hollywood's Vietnam war movies.

Da 5 Bloods pays homage to Coppola’s film, Apocalypse Now, incorporating the Vietnam war from the film and the African background from the book it was based on, Conrad’s Heart of Darkness. At the get-go we see a club called Apocalypse Now with red lighting, playing Marvin Gaye's song, Gotto Give It Up. The fourBloods dance in tune while Gaye sings about letting loose and being yourself – a clear reference to Kurtz’s character in Apocalypse Now and Heart of Darkness. We are also reminded of the film and the book when we see the Bloods travel the river through the country on a boat to get to their destination.

Lee makes the flashbacks in the template of the 1960-70s war films as if he is trying to make up for the lack of black Hollywood war movies. They are shot in 16mm in a 4:3 ratio to truly differentiate from the past, present and make it to  look as if he's using war footage. Instead of taking different actors to play the younger versions of the present-day Bloods or CGI, the same actors in their present appearances are used to give a sense of familiarity, as if they are in both the eras at the same time, mirroring their own actions.

The film also handles PTSD among Black war veterans well. While it starts as a comic scene with Paul not being interested in some hawkers and their wares, it quickly spirals out of control with him snapping at them as he's reminded of his leader and friend, Norm. It escalates with us realizing that Paul is a very troubled man to a level that even the audience doesn’t know whether to believe him when he says that he is onto something about the ambush from the Vietnamese gang or if he is just delusional.

Like every heist movie, we have hot-headed Paul who almost ruins the heist several times.The mastermind seems to be Otis who comes up with the plan and figures out how to export the gold. Vinh is the local guide who seems oblivious at first but then comes to the Bloods’ rescue. Jean Reno does a brilliant cameo with the character Desroche who seems innocent but is the actual villain. Then we have David and Melvin who are the comic relief with Isiah Whitlock Jr. who plays Melvin even saying his famous catchphrase “shiiii-it” to lighten up an otherwise intense scene.

Lee is no stranger to comedy, making sure that there are some light-hearted moments in between like when David, Paul's son finds them and asks to be included in the heist or when he tries to get a pair of shoes hanging on a rope across the river. We see another hilarious scene whenOtis tries to put two and two together to figure out why his ex-lover's daughter is half black and about the same age as the time passed from the war to present day. But at the same time, Lee also uses that to send a message.He showcaseshow the Bloods’ fellow White soldiers andthe locals they fought for, poorly treated their illegitimate children, insulting them because they were half-black.

When a one-legged child beggar asks the veterans for money, it reminds them of their treatment when they came back from the war. Those who called them “baby-killers” didn’t realize that these men didn’t have much say in the war. They were made to fight for a country's independence while their own country oppressed them.While it seems that the Bloods are the bad guys for ripping off the poor tribals from their payment for acting as US informants, Lee again twists it by giving us a Robin Hood narrative. The locals are paid more than America’s own soldiers because they are at their mercy.While they send Black citizens to die with no reward, they have no qualms in bribing South Vietnam with exorbitant amounts of money.

The film tends to go into the melodramatics a tad too much, especially during the flashback scenes. Grand, orchestra music plays loudly in the background as Stormin’ Norm (their leader) played by Black Panther’s Chadwick Boseman leads the Bloods through the explosive forests of Vietnam. Quick zoom-ins are used, as we go from admiring nature to the barrel of a machine gun. Gory details are seen in their full, clear glory like blood sprouting from a soldier’s face or when one of the Bloods steps on a land mine, the camera focuses on Eddie's blown-up torso for a long time, searing the image in the viewer’s mind. Mythical legend, Stormin’ Norm walks at a slow pace through gun-fire unscathed, while David, one of the Bloods’ son fires a bulls-eye having never even held a gun before.

Marvin Gaye’s songs are used throughout the movie with one scene in particular where the choice of song seems to be appropriate. After the first encounter with the Vietnamese gang, the beaten-down group are making their way to the temple with Marvin Gaye crooning “who are they to judge us”. It resonates as every decision the characters including the gang make in the film are out of difficult circumstances and no one can judge them on it.

While the movie’s genre seems to be an amalgamation of a heist and a war movie, it is also a documentary of sorts. It talks about Black war heroes like Milton Olive with Melvin, one of the Bloods, taking inspiration from him to save his team from a grenade. Activists like Malcolm X and Aretha Franklin are constantly referred to. Crispus Attucks, who a lot of people wouldn’t know about is mentioned for being the first Black man to be killed at the Boston Massacre. Radio personality Hannah Hanoi is included to show the reactions of the Bloods when informed about Martin Luther King Jr.’s assassination; the irony of fighting an imaginary enemy while their own country is killing them off isn’t lost upon them. Lee doesn’t just talk about Black history but also what happened in Vietnam with the mention of the infamous My Lai massacre, making the otherwise one-dimensional Vietnamese thugs grey characters.

Lee uses a scene where the Bloods spy on a group of Viet Cong to humanize the “enemy”. The rebels too are people with a family. One of them talks about his wife and a poem she left him. They talk about how they're heroes to their families for protecting them from the Western invaders right before the Bloods gun them down. It shows the beginnings of realization as to why soon the Leftists in America were against the American occupation in Vietnam. It shows both sides of the story - how the Vietnamese people are still oppressed in their country to this day, the only difference being that it’s not through racism but the government denying basic human rights to all its people. Lee shows how inequality and suffering exist in every single part of the world by giving a reasonable motivation to the Vietnamese gang that tries to take the gold from the Bloods. While they seem to be working with Desroche, their reasons are valid because they earned that gold through their blood, sweat and tears during the Indo-china wars.