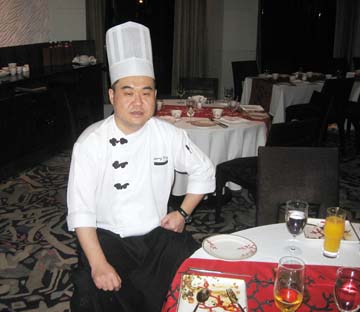 If you are wondering why Shangri La's Eros Hotel features prominently on this F&B, health and recreation e-magazine, let me be forthright. The hotel is always doing timely and innovative F&B theme events with a difference.

The ingredients are authentic, the recipes eclectic and its chefs are always in complete command under the chimney. This time round, till September 6th you get a range of duck delicacies. Be it the famous Peking duck soup, crispy fried shredded duck and duck rolls for starters or an array of duck dishes for the main course at its formal 19 Oriental Avenue restaurant.

For Delhi foodies, duck is not such an attraction. It is a good old chicken city that experiments with food perhaps once every few years. Besides, the duck meat has a peculiar smell and after taste and lots more fat than its famous cousin chicken (butter chicken excluded!). Originally from Beijing, Chef Wang Bing says, "Each recipe of the duck has to have a certain kind of duck of a certain weight. This will ensure that the duck a customer ate today would have the same taste even if he ate it six months down the line. Yes, the duck has a peculiar taste because the duck used is aged at least six months. The flesh develops a taste that is not found in chicken. Chicken grows faster, in about two months".

For starters we had the famous Peking duck soup that had a pungent but palatable aroma and a fine white milky base that was not thick and light on the belly. This was followed by the well-garnished sauted crispy-diced duck with chilies and onion. The duck meat is a little tough and has lots of fat and an after-taste unlike the broiler chicken. But after a few bites, the taste grows on you and you start to relish it. Chef Bing has used some Indian herbs to make it taste-buds friendly.

These include black pepper instead of white pepper, cardamom, ginger and cloves. The special Beijing roast duck that was much craved by us and reminds of the taste of roast turkey. It was delicious. The special meal on offer comprises Beijing roast duck and comes as a three-course: duck roll, duck soup & stir fried shredded duck that costs Rs.2,500. Then we had the crispy duck roll. With a combination of sweet and salty, it had an interesting taste. It was light and for once, you got the real taste of the duck meat rather than meat covered in fat.

And main course had more duck. There were steam plain rice accompanied with shredded duck in red chilly sauce and vegetables and also the braised duck in chilli bean sauce that tasted extremely wonderful. When asked by fnbworld what prompted the hotel to do the duck festival, Chef Bing said, "In India, some people don't eat beef and some don't have pork but they relish chicken".

Duck is undoubtedly better in taste than chicken as chicken has a neutral flavour and we get chicken everywhere, whereas duck is somewhat rare, hence we only get it fresh. What oil did you use for cooking the duck delicacies and will the duck taste good in olive oil as well? We use the regular Indian vegetable cooking oil. In China, we use peanut oil or mustard oil but if it is cooked in olive oil it will taste better than what it tastes in the regular cooking oil. My favourite duck preparation is the crispy fried duck, said Chef Bing.

The ducks for this festival, weighing just a little over 2.5 kilo were being sourced from a specialized duck farm in Gurgaon in Haryana. The Peking Duck can weigh up to 6 kilo and beyond and has an even more pungent taste back in Beijing. The first Peking Duck's ancestors were migrants from the United Kingdom to China, says Chef Wang Bing with his trademark smile! The most popular duck dishes in this festival are the salt and pepper duck and also the crispy fried duck.