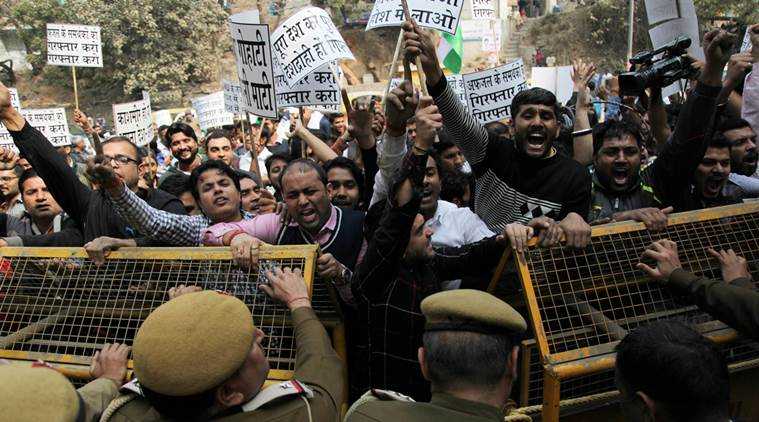 To lies, damn lies and sedition was added a large measure of an old Indian ailment named treason. Such was this season of utter madness that engulfed the whole nation this February. At centrestage stood Delhi Police Commissioner (now thankfully retired) B.S.Bassi orchestrating a case of sedition against Jawaharlal Nehru University Students’ Union president Kanhaiya Kumar. Much of police evidence against the JNU students was based on doctored tapes that intertwined objectionable slogans into legitimate broadcast speeches to make out a case for sedition. Even after doctoring had been shown to have been done, Mr Bassi chose not to try and find out who did the doctoring which is where one strand of sedition lay.

The JNU Students’ Union president was handed over to Mr Bassi for safe custody. Yet he was beaten up in the presence of dozens of policemen by men in black coats in a modus operandi of inertia that is a part of police methodology when dealing with inconvenient targets. Every time this failure of the police to do its duty was pointed out in televised debates both Mr Bassi and retired policemen and women quickly asserted that a “lathi charge” would have been counter-productive. NOBODY ASKED FOR A LATHI CHARGE. There are other ways by which a central figure can be protected without the use of unwarranted force. As a cub reporter in the crime beat one learned early in life that there is a sanctified police method in the “flying wedge” in which muscular policemen provided a shield around the protected person and the whole phalanx rammed their way through a hostile crowd. Forensics would have shown it to be an appropriate use of force against hypertensive lawyers sullying the sanctity of the courthouse. But Mr Bassi had to teach the JNU students--and journalists who kept highlighting inconvenient facts--a lesson and he rewarded those who did the dirty work by not arresting any of the assaulters. 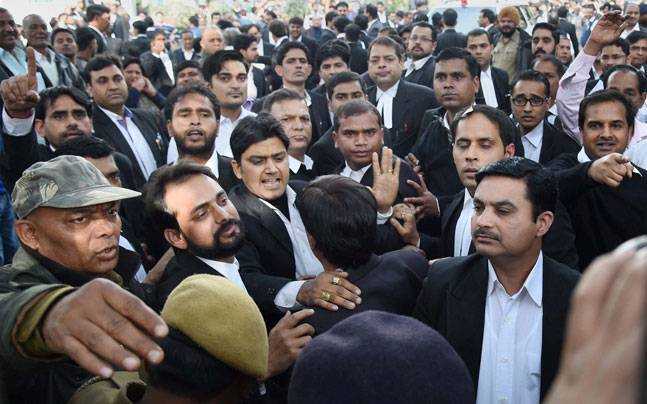 Adding fuel to fire was the selective reading of varied texts, including an epistle on Mahishasura, by Union Minister for Human Resources Development Ms Smriti Irani in Parliament. She skipped the explosive content of the first trigger of recent student unrest in the country, the letter written by Rohith Vemula student in the Hyderabad Central University who committed suicide after being expelled from the hostel. Rohith had asked the Vice-Chancellor of the university to supply a dose of poison and an adequate length of rope for backward class students to end their ever-present misery. Ms Irani evoked her own motherhood and maintained that Rohith was not a Dalit thereby wiping out in one stroke the perceived injustices that led him to commit suicide – a penal offence for pushing a person to take own life. Other assertions and noteable omissions in Ms Irani’s speech in Parliament have led to a Privilege Motion.

And now treason. The Hon’ble High Court of Delhi while granting provisional bail to the JNU Students’ Union president Kanhaiya Kumar made reference to the deployment of Indian troops on the difficult and dangerous Siachen Glacier which makes it possible for students in the comfort of a university campus to raise anti-national slogans under the rubric of “freedom of speech”. The Hon’ble High Court had this to say in its Order: “…Suffice it to say that such persons enjoy the freedom to raise such slogans in the comfort of university campus but without realizing that they are in this safe environment  because  our forces are there at the battlefield situated at the highest altitude in the world, where even the oxygen is so scarce that those who are shouting anti-national slogans holding posters of Afzal Guru and Maqbool Bhatt close to their chest honouring their martyrdom may not be even able to withstand  those conditions for an hour.

“The kind of slogans raised may have demoralizing effect on the family of those martyrs who returned home in coffins draped in the Tricolour”, the Order read.

This reference to Siachen comes in the wake of a rising crescendo of demands to vacate the inhospitable glacier after the most recent avalanche that caused the death of ten Indian soldiers. Some Indians want India to withdraw from Indian territory because Pakistan wants us to. For many years after Indira Gandhi ordered the Indian Army to pre-empt Pakistani plans to grab the glacier under the guise of a mountaineering expedition in 1984 there was a concerted campaign against the deployment even by top Indian Army Generals who actually planned and executed the deployment.

For many years there was a sustained campaign of perception management to generate public opinion based on the cost of retaining troops in a very difficult terrain bereft of any strategic value. The cost of delivering a loaf of bread to the Siachen brigade; the number of deaths due to high altitude sickness and natural disasters like avalanches and snowstorms; the difficulty in casualty evacuation, etc.  were fed to the media even as Pakistan was making concerted attempts to dislodge Indian troops from the high ground on the Saltoro range. In one such misadventure in 1987 Pakistani troops infiltrated into the glacier area and captured the highest point from where they were able to look down and shoot at our soldiers in lower peaks. They named the post Qaid post after the founder of Pakistan Qaid-e-Azam Mohammad Ali Jinnah.

Acutely aware that such a military situation cannot be allowed to continue the Indian Army decided to capture the post located at 21,000 ft and neutralize Pakistani presence. In the first attack Indian troops were beaten back with ten casualties. In the second attack planned after a lapse of a month saw India attacking with small forces of five men each from different directions. One led by a diminutive Sardarji (about 5ft-4in in height) Subedar Major Bana Singh scaled an icewall  450 meters high and took the Pakistanis by surprise. He opened the door of the bunker, lobbed a grenade and shut the door. His team engaged the Pakistanis outside the bunker with bayonets and many Pakistanis jumped off the cliff to escape the Indian wrath. Since then there has been no Pakistani presence on the glacier and any withdrawal will be a unilateral one by India. That is why the Pakistanis have refused to delineate the actual positions of troops of the two countries. It would show that India rules the heights (Qaid Post was renamed Bana Top and he was awarded the nation’s highest gallantry medal the Param Vir Chakra and  the rank of Honorary Captain.)

In this background and dismayed by the effect of the sustained campaign to demilitarise the glacier a veteran Defence Correspondent wrote in his fortnightly column “Military Matters” in the late 80s the following: “In the meantime  Ms Bhutto (Benazir Bhutto) finds it expedient  to play on Indian sentiments about a democratically elected government  under siege from a rapacious military establishment….at the same time wait for jelling of an insidious idea, a psychological bug really,  that has been floated within the military establishment – that the Siachen operation is a wasteful expenditure in men and material and that it is better to come to terms with Pakistan on the basis of existing status quo….

“While it appears incumbent on the rest of the Indian nation to help maintain the morale of the Indian troops at a high level in support of their duty to defend Indian territorial integrity, no such similar consideration prevails with these officers whose direct responsibility it is to maintain among the troops under their command a high degree of motivation.”

That put an end to that nonsense.

After the avalanche the demand for vacation of the glacier has been resurrected. Chief of Army Staff General Dalbir Singh sought to quash the demand at the first opportunity he got but it is generating a tempo of its own.

Given that both Houses of the Indian Parliament have adopted the following resolution: “This House notes with deep concern Pakistan’s role in imparting training to the terrorists in camps located in Pakistan and Pakistan-Occupied Kashmir, the supply of weapons and funds, assistance in infiltration of trained militants, including foreign mercenaries into Jammu and Kashmir with the avowed purpose of creating disorder, disharmony and subversion…

(a) The State of Jammu & Kashmir  has been, is and shall be an integral part of India and any attempts to separate it from the rest of the country will be resisted by all necessary means…”

Can and will the Apex Court take suo moto cognizance and pronounce on the issue?