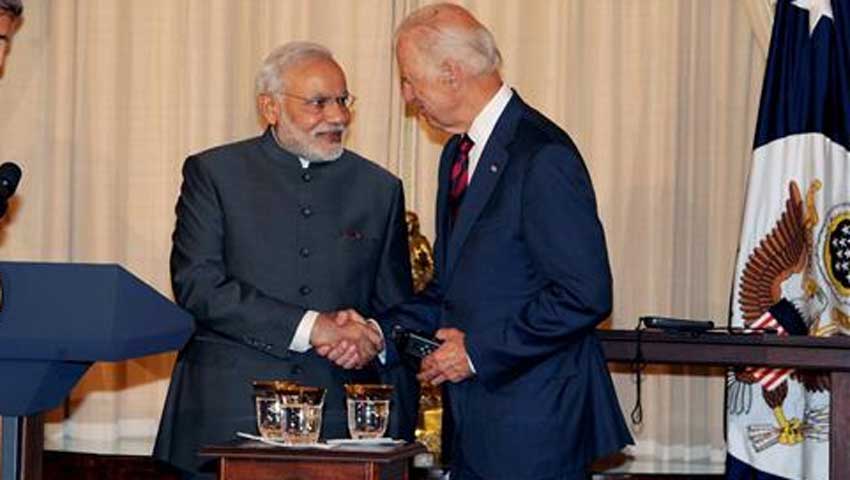 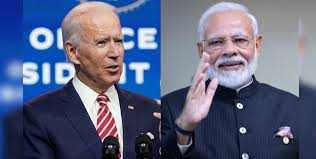 The 'Howdy Modi' event in October 2019, followed by 'Namaste Trump' in February 2020 gave an impression even to the seasoned diplomats that New Delhi might be putting ‘all eggs in one basket'. And a Plan B would have to be  spelt out by India in the event of a Democrat winning the elections in the US.

The day Joe Biden took oath as US President, the 'sensex' (India's stock market index) soared to breach 50000 point barrier for the first time in its entire history. With this, India conveyed to the world -  loud and clear that it is prepared to deal with the US under President Biden.

President Biden is by no means charismatic like Bill Clinton nor are his oratory skills captivating like those of  Barack Obama. But his rise to the most powerful post in the world has come as a fresh breeze to India. His unassuming demeanour in sharp contrast to that of the loquacious President Trump, his commitment to democratic ideals and his promise to heal a badly torn America has endeared him to many.

Notably, the foreign policy watchers would recall Joe Biden’s role in co-sponsoring “Naval Vessels Transfer Act, 2005”, that allowed India to acquire the first US built warship. Later, he played a crucial role as a Chairman of ‘Senate Foreign Relations Committee’ in 2008 to clinch the famous Nuclear Deal between India and the US, albeit under a Republican President.

The perception created by his past engagements with India as senator as well as Vice President of America was strengthened, when the Press Secretary Jennifer Rene Psaki affirmed, “President Biden, of course, has visited India many times, (he) respects and values the long, bipartisan, successful relationship between leaders in India and the United States and looks forward to continuation of that”. The broad contours of some of the policies of the Biden Administration policies pronounced later augur well for a strong and a mutually rewarding Indo-US alliance.

There is little doubt that the United States now considers India as its preferred strategic partner. In a recently declassified policy document “Indo-Pacific Framework” developed in 2017-18 by the National Security Council of the US, the growing assertiveness and threat of China, which it described as a ‘Revisionist Power”, was acknowledged with concern. The document stated that a partnership with like-minded countries in the region would act as a force multiplier to achieve peace, deterrence and interoperable war fighting capabilities to counter China.  In the same context, the document recognised India as a capable and reliable ‘preferred partner’ and a ‘net security provider’ in the region and accepted India’s crucial role in meeting the geo-strategic goals of the US.

The Indo-Pacific framework of 2018 needs to be seen in conjunction with a major global policy shift announced by President  Biden. Dumping the Trump’s “America first” policy, which led to a significant shrinking of its role as a world leader, President  Biden has vowed to restore America’s place back at ‘the head of the table’ and build a new world order. Both the countries are aware that countering China’s threat and ensuring a free and open Indo-pacific is the first and foremost step to achieve this objective.

Tanvi Madan, a senior fellow at the Brookings Institution, Washington DC feels that Indo-US strategic relations in last 30 years have been largely shaped by the rise of China. “The US is convinced that only India is capable of countering China in the region but needs Geo-political partners, Economic allies, technological associates and partners in global governance institutions to do so”, she further states. Undoubtedly, the scope of developing mutual co-operation and alliances between the two great democracies is unlimited.

Apart from this, the inclination shown by President Biden to engage with Iran and re-negotiate the nuclear deal should please New Delhi. India has been badly hit by the international sanctions imposed on Iran, which could change soon. Further, his recent telephone call to Russian President Vladimir Putin to explore the possibilities of extending ‘New Start Nuclear Arms Treaty’, that is expires on  February 5, this year, should bring some smiles here. A workable relationship between these two countries is always in India’s interests.

With President Biden at helm in the US, India can look forward to dealing with a President, who is traditionalist, values alliances and partnerships and engages through institutionalized framework rather than through unpredictable personal diplomacy subservient to whims and fancies of someone like a maverick Donald Trump.

However, a word of caution; India cannot be oblivious of the fact that the Democrats are determined to use America’s foreign policy as an instrument to bring about and promote what they call “the values”, the world over. Many Democrats are critical of India's legislations like Citizenship Amendment Act (CAA), abrogation of Article 370 and bifurcation of Jammu and Kashmir.

It is to be seen to what extent a prudent and sagacious US President will allow his realistic geo-strategic goals to be altered at the altar of idealistic ethos in an ever-changing world.