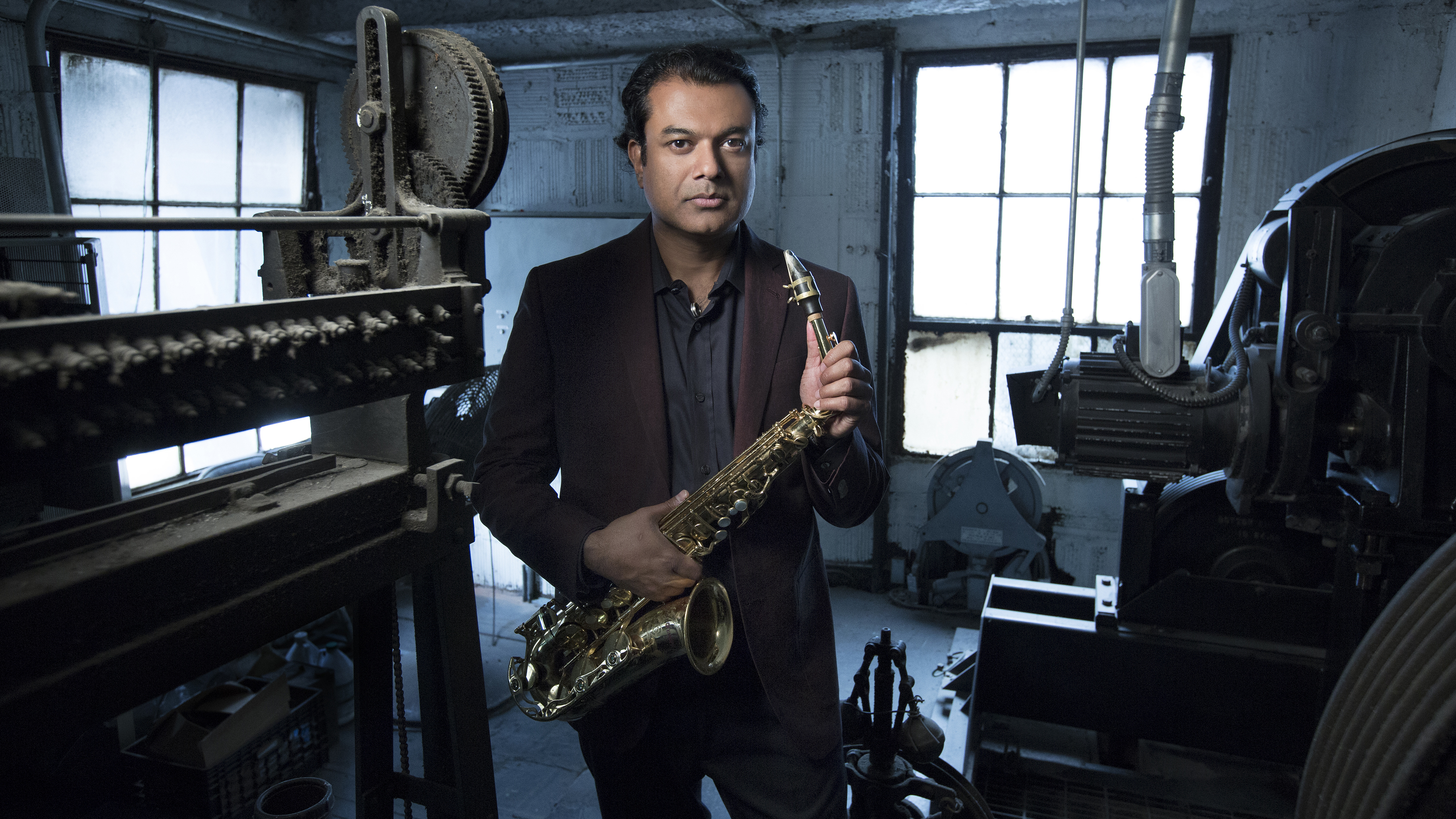 "JazzTimes’ critics pick their favorite artists, books, documentaries, and more from the year just past.”

Rudresh is the Hindu name for both Supreme dieties (creator & destroyer) Lord Shiva and Lord Bhairava (worshipped to keep one's ego in check). True to the name (also in numerology: Rudresh is most potent, the mystical number 9). And, I share that number with him. We at fnbworld.com are truly pleased and humbled to introduce to you the absolute soulful, sensational master Indian-American world famous alto saxophonist Rudresh Mahanthappa. 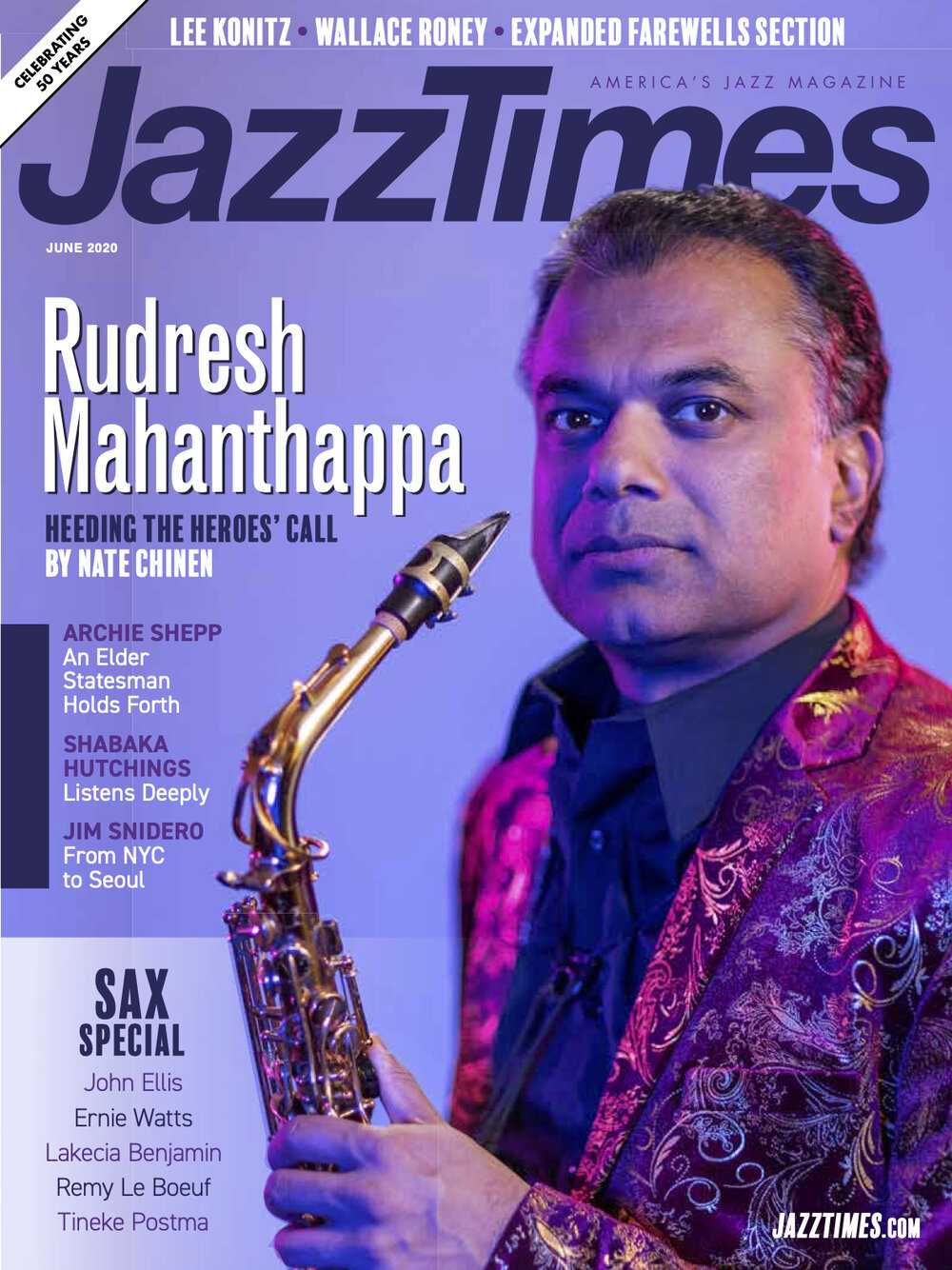 The son of Indian emigrants to the U.S, he was born in Trieste, Italy as a result of his father's job in academia, but he spent most of his life in Boulder, Colorado. He graduated from Fairview High School in 1988, thereafter, did the BM from the Berklee College of Music in 1992 and an MM in jazz composition from Chicago's DePaul University in 1998.

After moving to New York City in 1997, he released the album Architextures with pianist Vijay Iyer. The two have since continued  collaboration and released the albums Black Water, Mother Tongue and Codebook with Mahanthappa's quartet, and Raw Materials as a duo.

At present, at the Anthony P. Lee'79 as Director of Jazz at Princeton University, where he teaches improvisation and directs small groups. In 2019, he organized the first annual Princeton University Jazz Festival, which featured master double-bassist Dave Holland along with other students and professional musicians.

Here's the transcribed and tweaked interview for brevity and

Hey, Ravi. I'm sorry this is taken so long, life is a busy thing. Yeah, I was planning on recording audio anyway because doing these email interviews is incredibly time consuming.

Ravi V. Chhabra: I must confess, I heard your musical fireworks quite recently and it blew my mind off. That very moment, Pundit Kadri Gopalnath's name sprang in my head and I proceeded to check out your brilliant profile. Pundit Kadri, Dr. L. Shankar and Guru Vikku Vinayakram have been some of my heroes since decades. How did you get introduced to Kadri in terms of style and the challenge in blending it to the western one?

Rudresh Mahanthappa: That's really an oversimplification. And I think that's the question that made me procrastinate doing this interview for so long, because it's much deeper than just adapting what Kadri did to a Western style. I'm Indian American and part of, one of my goals as an artist is to express what it means to be Indian American and what this hybridity means so. It's not coming from a place of just being keenly interested in Carnatic music, it's coming from a place of actually voicing what it is to be bicultural. I'd been listening to a lot of Indian classical music, both Hindustani and Carnatic, for a very long time.

Well, I shouldn’t say a very long time starting in college, I guess. And that was also around the time I was having a sort of identity crisis as to trying to figure out how I fit in to the American cultural landscape. And I think that's something that children of immigrants deal with in general. So I've been listening to Indian music and I was trying to play along with albums and learn by ear the way I have learned to play a lot of jazz and that was very difficult to try to, you know, play what vocalists were singing or violinists and all the musicians and the sliding around. But once I heard Kadri, I could actually look at it in terms of being a saxophonist and try to get inside how he was doing, what he was doing from a technical point of view, so it's a much longer story than that. And that's been well documented in other interviews, if you want to check that out.

Ravi: Why did  you choose the alto sax over the other ones...I am particularly fond of the tenor sax that was also played alongside the alto by John Coltrane. Do you play other wind instruments/brass and non-brass?

Rudresh:The alto sax was the first one that was put into my hand. Generally, people start when as children, people start playing alto saxophone. Then, you know, I did play a little bit of tenor in high school, but it never felt natural to me, so I stuck with alto sax, but I was much more interested in what the tenor players were playing: Coltrane, Brecker, Hank Mobley, you know, Johnny Griffin and any number of folks. But I was more interested in trying to bring that sound of vocabulary to the alto saxophone as opposed to just playing tenor saxophone.

Do you play other wind instruments? Brass, non-brass. Well, I played the recorder like everybody does in grade school, but I actually took it quite seriously, so I played that for two years before I switched to the saxophone. And, you know, a lot of the fingerings are the same.So, the transition was quite quick.

Ravi: I have always believed that Indian/classical music in its myriad forms has not got the exposure and accolade it deserves in the global stage, be it in the vocal dimension: Dhrupad, konnakol,  or percussion: Ghatam, dholak, santoor, shehnai, veena among others. Your take?

Rudresh: I don't know how to answer that question. I mean, the accolades it deserves globally or in India or in America, I'm not quite sure what you're asking. I think it's as prevalent as any other non-western music in the U.S. and in the western world. I think that many people know who Ravi Shankar is, more than they might know, you know, classical musicians from Southeast Asia.

Ravi: How would you describe yourself coming from Indian parents and your Italian, American link?

Rudresh: I'm Indian American. We lived in Italy for a few months. I just happened to be born there. So I don't really identify with being Italian.

Ravi: Who all have you performed with LIVE and as soloist and as a band? I see your photos with legends of jazz such as Archie Shepp and the rest?

Rudresh: Well, that list is enormous. You can look at my bio. I think things of note were obviously working with Kadri, I was in Jack DeJohnette’s band, I played a bunch with Danilo Pérez, I didn't play with Archie Shepp. I interviewed Archie when he became an NEA jazz master. And I've had him as a guest here at Princeton. But we never played together. Who else, you know, I've led my own bands and I've played all over the world with my own band, so that's primarily what I've done. Vijay Iyer and I were collaborators for many years, I wouldn't say we're not collaborators now, we just haven't done anything in a while. So he was always a musical partner.

Ravi: There lies an ancient soulfulness and meditative quality in your slower work, where does that emanate from? I am specially referring to the semblance with some of the seminal work by John Coltrane - A Love Supreme and Eric Dolphy Feat - INDIA. What reeds do you use?

Rudresh: I'm not sure some of it's coming from John Coltrane, some of it is coming from South Indian music and trying to somehow carry the weight and the depth of our great ALAP. Of course, Coltrane Love Supreme, Transition and Crescent, those are all great albums. Um, I don't feel particularly connected to the tune India. I mean, that's actually a blues. If you listen to the form. I use Vandoren Java 2.5.

Ravi: As I view it, you are blending the hugely popular Indian-Carnatic style into western instruments in jazz that is quite the opposite of what has been done before (Shakti, Zawinul etc). Can we qualify it as a genre you have created?

Rudresh: Can we qualify as a genre? I think that that might be a stretch. I mean, I think that it's different in that I'm coming from the perspective of being an Indian American as opposed to being a white Westerner maybe who is interested in Indian music, you know, it goes far beyond interest. It's more about my blood and soul.

Ravi: Your favourites in saxophone giants and their contemporaries. Reasons?

Ravi:  You are certainly in a league of your own as much as the famous Ravi Coltrane or Brecker brothers. Any plans to jam with Ravi with or sans your combo?

Rudresh: I like Ravi Coltrane a lot, but no, we haven't planned to do anything together. I mean, there are a lot of famous saxophonists. And in New York, the sax players I have worked with in the jazz aura are Steve Cole a great alto player, and Bunky Green, also a great alto player who's more like a living legend of this music. He's in his 80s. And, you know, there are a whole bunch of tenor players that you may have never heard of that are really amazing!

Ravi: Religious beliefs and a brief note about your family/siblings etc?

Rudresh: Religious beliefs and a brief note about your family, because we were raised Hindus. My parents are practicing Hindus, but I think we've kind of adapted our own spirituality each one of my brothers. And I think more than anything, our parents raised us to be good people and thoughtful people. And I think that's kind of something that's a positive trait that seems to be common in all religions and in all senses of spirituality, a sort of brotherhood of man, so to speak.

Family, siblings, my father came to this country in the early 50s to do his Ph.D. at Harvard, he went back and married my mom and came back. My older brother is seven years older than me. He is a major player in the biotech world. And my younger brother is five years younger than me and he's a professor of chemical engineering. Both of them were great musicians. But when academic roots and I think there were other things I would have done if I hadn't done music thatI feel strongly about, particularly, you know, math and some aspects of economics, and maybe I'll get back to those someday.

Ravi: Plans afoot for travel to India in search of musical exploration and how do you view the present and future jazz scene in India in terms of indigenous jazzist(s)?

Rudresh: No plans to travel to India. I was there in 2016 to play. We played in Pune, Delhi and Bangalore but nothing planned. It's actually not really a priority right now. But if it were to come up, that would be great. The future jazz scene in India. I don't really keep track of the jazz scene in India.Now I'm spacing on the father and son, father plays piano. Louis Banks, Louis and Gino Banks and there’s some great electric bass players in India as well but I haven’t really kept track of what’s going on over there.

Ravi: Do you like to do cover(s) as they have a charm and reputation in their own right?

Rudresh: If you heard my last album its all covers. I not sure what a cover is - a jazz standard can be considered a cover, cover in poptunes. Well you knowI played a Stevie Wonder tune and a Johny Cash tune on my last album. I think if you feel strongly connected to some contemporary pop music on a personal level than is certainly worth exploring that, but I have no desire to cover something from the pop world just for the sake of doing it just to increase my audience or something like that. So, anyway, Ravi I hope that answers your questions and if you have any other thoughts just let me know.