Dogs with a distinct flavour 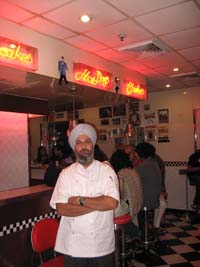 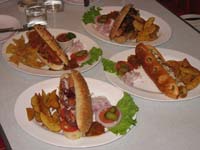 The All American Diner is a restaurant with a difference. Famous for a mishmash of popular American food, it is housed inside the sprawling India Habitat Centre (IHC).

It is back with its annual Hot Dog Festival with a range that comprises 'California Hot Dog', 'Spicy BBQ Cheese Dog', 'Chicago Hot Dog', 'Mexican Hot', and the 'Italian Connection' prepared painstakingly by the accomplished Executive Chef Tirath Singh.

Speaking with fnbworld's Ravi V. Chhabra, Exec Chef Singh, whose specialization has been baking said: "I have tried to give different breads and added flavour to each hot dog - for me this is a natural progression". And indeed, both the bun and fillings have a distinct flavour. The hot favourite at the festival being the Smoked Cheese Dog, though my favourites were the Mexican Hot (Corn Meal Bun & filling of Spicy Three Pepper Chillies) and Italian Connection (Stuffing with Molten Mozzerella, Chillies & Mayo Olives).

Chef Singh has travelled widely and worked with top restaurants in Nigeria to the famous Ritz in Paris! In India, he started with the Taj Group and has been involved with the Old World Hospitality that runs eateries at IHC ever since the inception of the food court Eatopia. Chef Singh's favourite cuisine is Punjabi but he is fond of both French and Italian food as well.

About American food, he says assertively that it hasn't evolved much. He feels that the Americans are masters in selling/branding. "What better examples than McDonalds and Dominos?", he quizzes. With a backdrop of Pink Floyd's "Wish You Were Here" and an interior befitting the American pop culture, the American Diner is a place for good food that is served in style. Restaurant Manager Arijit Narayan Dev personally and smilingly attends to each guest and seeks suggestions for improvement and that surely makes dining pleasurable here.