NEPOTIC GUNS OF UP! 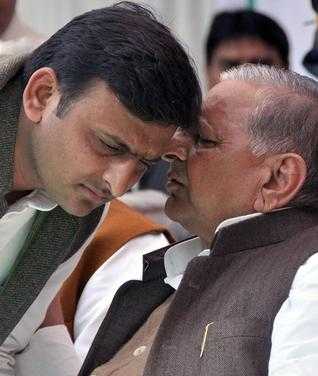 What had started as a resolute attempt to rubbish the charges of nepotism and Yadav clannishness in the Samajwadi narrative within party and governance in poll-bound Uttar Pradesh, has rapaciously recoiled on the ruling hierarchy with a vengeance, which no one could foresee at its initial volatile stage, from where the situation went perilously from bad to worse. On the sharp turn of events a little while later, each Samajwadi top gun could be seen fighting a grand battle of one up-manship and self-aggrandizement. Slowly, the area of conflict among Samajwadi rulers widened to cover capturing the effective powers to select candidates for the ensuing assembly poll. 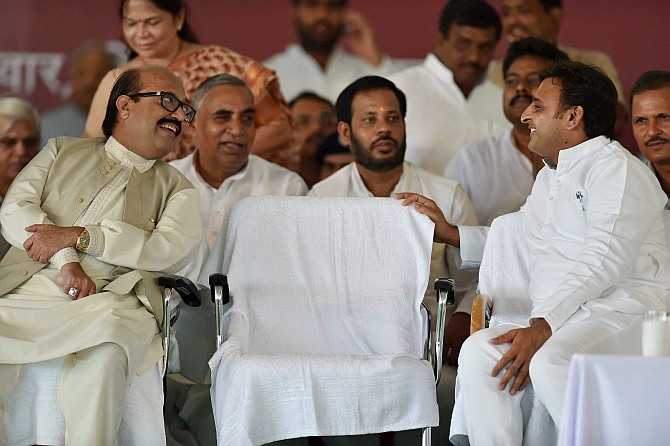 As of now, what has come to surface looks like an internecine war between party supremo and CM Akhilesh's father Mulayam Singh and uncle Shivpal Yadav on one side and Akhilesh and uncle Ram Gopal on the other. Outwardly, it appears all of them are out to take each other's head, but the facts of this fiction ostensibly lie buried in the ascendance of too many Yadava satraps as virtual kings or king-makers in a state where national parties unfortunately have had no ruling stakes for years. Just two regional parties have been calling the shots there, with their leaders Mulayam Singh Yadav and Mayawati respectively monopolizing authority to decide the fate of the state.

Although Shivpal Yadav, already unceremoniously removed from the cabinet, looks firmly entrenched in Mulayam's camp, Ram Gopal remains undaunted and unusually active in the Akhilesh group, knowing more than anyone else, that CM-son finally remains Mulayam's main weakness, despite his unusually sweet overtures to both these leaders, "sharp differences" with the CM notwithstanding. But both remain in tough competition to notch up juicy turfs of power and influence on the back of the supremo's authority. Whatever else is given out for public consumption, it still sounds incredible that Akhilesh indeed had the temerity to sack uncle Shivpal and his close ministerial colleagues, in defiance of his father's 'diktat', who once took calculated risk to impose on UP a wholly novice Akhilesh as CM.

However, now in the midst of growing bitterness at the top, when the party looks split vertically, that old piece of fiction seems to be turning real. At a meeting of senior leaders on Monday, where the CM was present, acrimony, bitter exchanges and personal attacks came to the fore, pointing to the reality of high-voltage power struggle, one that may be seen as succession war. Even Mulayam and Akhilesh publicly traded biting barbs. The CM broke down, too, and offered to quit, stating : " Let Netaji install a CM who he feels is honest.” Mulayam, however, made Akhilesh touch uncle Shivpal’s feet, but the latter was not amused. Meanwhile, clashes broke out outside the venue with supporters of rival sides exchanging blows.

Let's take the narrative back to the 2012 poll mandate. Deep in his paternal love, Mulayam had failed to assess the depth of the resentment developing within the families of these two rebellious Yadavs and some others, too, over the ceding of power on a platter to Akhilesh, a fresh post-graduate and just one-time MP, who had never passed through the rigours of unstable political climes that essentially demand hard work, calibre, sagacity and toughness of personal interiors from the aspirants. As the assembly mandate catapulted the Mulayam party to glory, he was highly elated and excited, no doubt, but was simultaneously pretty confused and impatient with the godsend opportunity for his young son to take the command of the country's largest, most populous and powerful state that sends 80 MPs to Parliament. He believed, for Akhilesh, it was now or never. Then, he managed to resist the feeble voices of dissent and protests which came from all those who are now seen siding with Shivpal and some also sitting with the CM. Even cabinet minister Azam Khan, a prominent Muslim face of UP, registered his stiff, but muted protest against a "fresher" Akhilesh being given absolute powers to run the state. But once Mulayam firmly decided to not ride the rostrum himself in favour of his son, exploring a better choice was out of question. No one entered his mind as CM probable, in the same way as Shivpal or Ram Gopal could never muster courage to propose themselves for the coveted seat, both fearing instant rejection.

Then came Amar Singh, the ultimate game-changer, now being variously described as "game spoiler" and “crafty manager” in the present context, who had full knowledge of Akhilesh's deep-seated hatred for him, a Thakur face in the Samajwadi set-up, long tried and tested by Mulayam as his right-hand man, except for the period he had run away from the Yadavas under tremendous pressure from the likes of Azam Khan, Akhilesh and a dozen other seniors. He remained in seclusion by choice, on some inhospitable terrains. His re-entry into the SP, after a stint in RLD, looked persuasive and friendly in the beginning, but is said to have soon turned vindictive, carrying a windy storm to torment the CM. Amar Singh is accused of widening the gulf of mistrust within the influential Yadav groups.CM himself has charged him with planting conspiracies to unsettle his regime. Mulayam, however, is not willing to hear “such crap” against him, though there are indications of this man variously “teasing” the CM in his inimitable style. After all, here is a man who saved Mulayam from going to jail and did hard legwork to collect large funds for his party in mid-nineties. Some even say that Mulayam felt terribly guilty after expelling Amar from the party and went into endless remorse.

So, it looks logical when Mulayam says, “ Amar is like my brother.” On Monday, he publicly chided Akhilesh for showing intemperate behavior, ebullience to his “close friend” and also questioned his competence. “Can you really win polls,” an angry Mulayam posed to his CM-son. In the same breath, he praised brother Shivpal, stating : “I cannot forget the work done by Shivpal for the party.” But if the original father-son move, intended to erase the stigma of family worship with greater power-sharing with ‘outsiders’, has now misfired, no one other than the SP supremo himself is to be blamed. The consequence of Mulayam unreasonably espousing  family politically and his subsequent failure to manage it has been catastrophic. Maybe, Amar Singh dug the ground deep enough to humiliate Akhilesh who was instrumental in his ouster from the party. What speaks for his clout is that Amar is seldom marked ineffectual in any given political spectrum. Now, it is widely speculated that whatever emerges from the Shivpal camp, is part of a plan orchestrated by Amar Singh. So, his role in the worsening Samajwadi crisis can’t be ruled out. Even Akhilesh alleges that Amar had written in a tweet that “There will be a big upheaval in UP in October and Akhilesh will not be CM in November.” Amar Singh, Ram Gopal and Shivpal have all innumerable friends in BJP and other parties that are considered hostile to Samajwadi Party. Akhilesh feels “they all are playing the saffron party’s game to pull me down.”.But Mulayam upbraids him for “talking this much of nonsense “

Clearly, Amar wants for himself a comfortable space in the party. And that would come only when Akhilesh demits office and Mulayam assumes power. Akhilesh as CM nominee is, therefore, not acceptable to Shivpal group for the ensuing poll. While this camp publicly sees Akhilesh as "wholly incompetent" to rule UP, mainly because of his "constant failure to hold his flock together", the CM insists on having full powers to "control the rowdies and conspirators" in the govt and the party. In the meantime, Mulayam must be wondering why his own people have made him suffer a shipwreck. He has not taken lessons from politicians who promote their progeny and suffer the pain of severe family discords.

If all those Lalu Yadavs, Badals, Thackerays and many more family-promoter politicos in the country, shamelessly ignore the band of talent and merit that comes from the commoner community, it’s crime against the nation and a cause for national pain. What is happening in Lucknow today sends fie on the Mulayam bandwagon and the administration is suffering. Does this affliction come as he chose to go too far in doling out plum positions to members of his extended family, relatives and friends? We have heard of umpteen horror stories of nepotism at workplace. Here is one of Mulayam’s own making. But politicians being insensitive and thick-skinned, I am not sure, if Mulayam is really feeling shocked today!