Roads are meant for walking 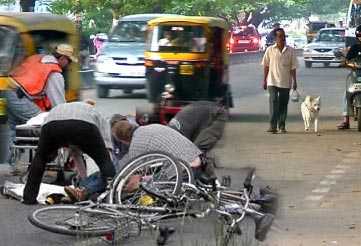 In India, traffic accidents are not on the health agenda. It is time the agenda is changed. Last week when the Union Minister for Rural Development met with an unfortunate and tragic accident on the road in Delhi, the issue was highlighted. But as yet, there is little understanding of the seriousness of the problem, and why India, which has just begun to motorise, needs to take action, and fast.

For me, the news of the minister’s death was particularly distressing. It hit me that seven months ago I was on the same road—South Delhi’s Aurobindo Marg—when my cycle was hit by a reversing car. I was lucky that Good Samaritans picked me up, took me to the same Jai Prakash Narain Apex Trauma Centre at AIIMS where minister Gopinath Munde was taken. The same wonderful group of doctors, who tried their best to resuscitate Munde, worked to repair my hands and nose, and stop internal bleeding. I was fortunate. I survived. But Munde, who had much to do in his life, did not. This waste of human lives because of sheer apathy and negligence should make us angry. It should make us change the way we design our roads, enforce traffic rules and, most importantly, take responsibility for our driving.

World Health Organization (WHO) lists traffic-related accidents as one of the top health agendas of the world. It says road accidents globally are the leading cause of deaths among young people between 15 and 29 years of age. Worse, it is in lower- and middle-income countries with fewer vehicles that 90 per cent of the accidents occur. We have started to drive, but without the roads and laws that ensure safety. who also finds that nearly half the people who die in road accidents are pedestrians, bicyclists and motorcyclists—vulnerable road users.

In Delhi, the traffic police database of accidents shows a small downward trend, which is good news. But it also shows that of the 1,600 people who were killed in 2013 in traffic accidents, as many as 673 people were pedestrians. Their only fault was that they did not realise that the city does not give them the right to walk. The vulnerable road users—cyclists, pedestrians, cycle rickshaw users and motorcyclists—made up 81 per cent of those who died. The situation is the same in all our cities. Clearly, our roads are not meant for anybody who is not in a large powerful vehicle.

It is not surprising that 60 per cent of these accidents in Delhi were because of what police classified as the driver’s fault—speeding, disobeying traffic rules and driving dangerously. In most cases, the vehicle that hits someone is never caught. In my case, the car hit and fled. I had no time to take down its registration number. There are no CCTV cameras in Delhi that capture accidents in real time. There is no way to catch, let alone convict, the culprit.

This is not all. We are not even designing our roads for safe use. We cannot walk, nor can we cycle in our cities. We cannot even cross the road safely to take a bus. Roads are engineered for cars. In this way cars, which transport less than 13 per cent of Delhi’s daily commuters, take 90 per cent of the road space.

The agenda for change is not impossible. First, we need to urgently amend the outdated Motor Vehicles Act. It needs to provide effective deterrence against illegal or irresponsible driving. At present, the penalty against misdemeanour is Rs 100. Just think, how will this stop anyone from parking cars on footpaths or from not driving irresponsibly? Secondly, we need to adopt new technologies for on-road surveillance and compliance. Delhi has some 100 cranes to tow away illegally parked vehicles. The rest of the world, which has taken to driving, pays the cost of enforcement, from installing parking meters to on-road CCTV cameras. The third agenda is to urgently fix the registration database of vehicles so that those who drive irresponsibly know they will be found, caught and penalised. This can only happen through annual vehicle fitness and registration systems. 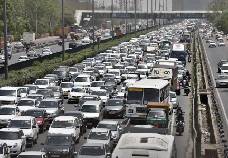