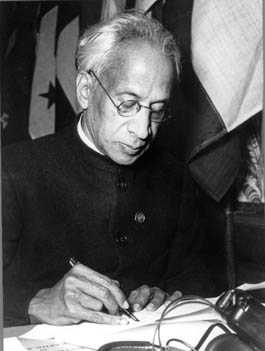 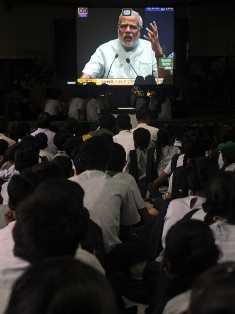 Teachers Day that witnessed encomiums aplenty has come and gone. This day, we snatch a few moments from our busy schedules to adore and remember those tall ones who gave us basic tips to become civilized, famous and worthy of living like human beings. But for their absence, we would not have reached where we are. So, they remain the basic drivers of our lives, an invisible force that works, lives and perishes with us.

September 5, the birthday of our great educationist, author, humanist-philosopher, Dr S Radhakrishnan, the second President of India, is celebrated as the Teachers Day because of his eminence as a distinguished teacher and philosopher. The story goes that when once his family and well-wishers insisted that he celebrate his birthday, Dr Radhakrishnan replied "Instead of celebrating my birthday, it would be my proud privilege if 5 September is observed as Teachers' Day." Thus prevailed the voice of this great philosopher-academician who became an instant inspiration for the teaching fraternity. The day's celebration began as the 'Teachers' Day' at the national level in 1962.

Dr Radhakrishnan viewed education as the "ability to listen to almost anything without losing your temper or self- confidence." He believed that a good teacher remained a student all his life and, in this process, he or she not only learned from books, but also from his or her students. His major contribution lay in the formation of contemporary Hindu identity. He did everything to promote the relevance of Indian thought in an age that sang paeans for the Western thought and culture. He relentlessly propagated the greatness of Indian traditions.

Millions of our teachers of past and present may not have taught in institutions of great repute like Dr  Radhakrishnan did or, may not have represented India at Harvard, Cambridge, UNESCO or delivered Hibbert lecture at Oxford, they certainly belong to the same category, as builders of modern India. Let's pay our grateful tribute to all of them.

As we remembered our teachers and Prime Minister Narendra Modi tried to make the day a little bigger by holding his long-distance mega class, inspiring school children, the occasion demands that we reflect also on the current status of teachers. If we take stock of the conditions that majority of our teachers face throughout the country, the day does not really look that big and worth celebrating at that? A survey shows close to 43% of school teachers in India now work in privately managed schools, most of them surviving on a miserable pay and depressive conditions. Of about 4.2 million teachers, 3.1 million teach in primary schools and the rest 1.1 million in secondary and senior secondary schools.

A media house, which investigated the service conditions of private school teachers in states, found that  while government school teachers get pay scales ranging between Rs 20,000 to Rs 40,000 per month, depending on their levels of qualification and experience, many work on salaries as low as Rs 2,000 per month. What a shame and height of manpower exploitation!

A Delhi school teacher tells the survey team, on condition of anonymity fearing reprisal sack, that her  official salary is Rs 28,000 per month, but she just gets Rs 20,000. She revealed, "I get a cheque for Rs  28,000, but I give back Rs 8,000 in cash every month." Another teacher was recently removed from her job after the primary school she was working in was taken over by a school chain. She used to receive Rs 3,000 per month, after putting her signatures on blank vouchers and registers. Subsequently, the management filled in the registers and the vouchers, showing payment of the mandated emoluments to her. In private schools, teachers complain, everything is "negotiable", depending on how the management is and how badly the teacher needs the money!"

Teacher exploitation has had its cruel date in schools through the decades in independent India. A young  woman joined a school in Ludhiana in 1978 where she taught nursery classes. She was initially paid Rs 70 per month and after 24 years of service, the school paid her Rs 750 per month. Alarming, indeed! At least 30 teachers at the same school were paid between Rs 400 and Rs 1,000 per month. Sources say many such schools existed in Punjab.

The RTE Act has made it mandatory for every unrecognized school to apply for recognition as this will help in improving the condition as recognition could be granted only to a school which follows the norms and standards specified in the RTE Act. But thousands of schools in the country remain unrecognized even today. According to a news report, more than a year since the Kerala High Court issued a directive to hike the salaries of teaching and non-teaching staff in unaided schools, most of the schools managements have failed to adhere to the order and are continuing to pay measly, with no govt move to address the issues plaguing the sector. This applies to almost every state. Govts don't look serious to check the rot.

Although big, reputed private schools in large cities and in smaller towns are known to fleece parents through donations and arbitrary raise in fees etc, they probably do not indulge in such trickery as they keep in mind their long-term business prospects, but simultaneously collect whopping sums from affluent parents. Picture is the same throughout the country. This speaks also why the teaching profession does not attract talented people.

Problems are too many at the school level throughout the country. Absenteeism is a serious drag in village schools. Reports of teachers out-sourcing their jobs to proxies and splitting the salary are not uncommon at various places. A report suggests a one-fourth of teachers in private unaided schools are not even professionally qualified to become teachers. Also, in thousands of unrecognized schools, just about 42% teachers are qualified. This stands in sharp contrast to private aided schools where 91% teachers are found adequately qualified. Government schools' tally of such teachers stands close to 83% of the entire strength.

The malaise of poorly qualified teachers can be traced largely to the uncontrolled growth of ill-equipped private teachers training institutes that neither have the qualified teaching faculty nor the right kind of training wherewithal. This results in these institutes turning out teachers who can't teach and communicate. So, under severe financial constraints and also, in consideration of their poor teaching capabilities, they accept any amount as pay and agree to every term of appointment. This neither helps the teachers build their careers, nor does it help impart quality education to students. Govts have just failed to strike at the very root of the problem. They neither tighten the private schools to upgrade their teaching standards, nor force the so-called training colleges to either run their shows with adequate facilities or shut them down. Possibly, black money plays a big role in this sordid story.

One can understand PM Modi reaching out to school kids and also showing concern for their teachers. When he addressed lakhs of children and jovially interacted with them across India, he appeared to be laying hands on Chacha Nehru's legacy. Fine, the Prime Minister has done well to utilize a national occasion to win children's hearts and, possibly of teachers too. But let him also gauze the pain of teachers who suffer the ignominy of exploitation of various kinds. His HRD Minister Smriti Irani seems to be focusing on this problem, but no concrete action has followed so far.

Governments at the Centre and in the states must jointly move to create an environment for delivery of quality education to children both in cities and villages. But this may not be possible without creating a large force of meritorious teachers. Harassment and exploitation of teachers grows out of greed. This must be checked with a heavy hand. PM must wake up to halt the spread of drudgery and sloth within the precincts of Indian schools. Massive digitalization of the country that PM has in mind will come only via meritorious teachers who are paid well and are treated with respect!

Disclaimer: The opinions/views expressed within this article are the personal opinions of the author. fnbworld/News for Soul is not responsible for the accuracy, completeness, suitability, or validity of any information in this article. All information is provided on an as-is basis. The information, facts or opinions appearing in the article do not reflect the views of fnbworld and fnbworld does not assume any responsibility or liability for the same.

[The online tabloid believes in open source; feel free to use any material with due attribution {Mandatory} to the author and webzine with a hyperlink. Thank You].