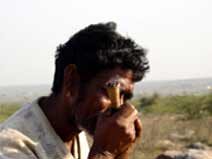 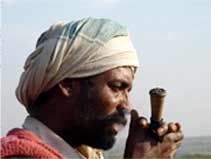 Smoking has been a favourite pursuit of men and women in Punjab, a relatively well-of state in India. While the Muslims share their hukka and chillam with all and sundry, the Hindus either prefer to keep one for their personal use or share it with members of their own caste.

In Punjab, the folks often coined humorous couplets, two of which are related to the hukka and chillam or Hukka hokum khuda da, chilam hukke did hi, Jitthe hukka dekhiye otthe dayiye pun. When translated to english, it speaks of God almighty and his order of not to smoke hukka, and chilam (the earthernware for burning coal) is said to be Ita's daughter, therefore,when one sets eyes on a hukka, one should not hesitate to smoke it. In response to this couplet, someone stated as Hukka hukm khuda da, shilam hukke di runn, jitthrhukka delhiye, otthe dayiye punn. In english it translates that the hukka is included in the commandments of God and chilam is itad's wife, wherever one sets eyes on it, one should break it into pieces.

The modern history of marijuana dates back to the 1930's. People didn't care whether it was heroin, cocaine, morphine, marijuana or opium, one horror was no worse than the other. This reflected both the lack of scientific knowledge and morbid exaggeration that have characterized much of the discussion of marijuana since that time. A large and growing body of scientific information about marijuana has now been reported in the press.One cannot know now which of the several uses of Cannabis was earliest. Since plant uses normally proceed from the simpler to the more complex, one might presume that its useful fibers first attracted man's attention.

Indeed remains of hemp fibers have been found in the earliest archaeological sites in the cradles of Asiatic civilization: evidence of fiber in China dating from 4000 B.C. and hemp rope and thread from Turkestan from 3000 B.C.Stone beaters for pounding hemp fiber and impressions of hemp cord baked into pottery have been found in ancient sites in Taiwan. Hemp fabrics have been found in Turkish sites of the late eighth century B.C., and there is a questionable specimen of Hemp in an Egyptian tomb dated between three and four thousand years ago.

The original home of Cannabis is thought to be central Asia, but it has spread around the globe with the exception of Arctic regions and areas of wet tropical forests.Cannabis spread at a very early date to Africa (except for the humid tropics) and was quickly accepted into native pharmacopoeias. The Spaniards took it to Mexico and Peru, the French to Canada, the English to North America.

It had been introduced into northern Europe in Viking times. It was probably the Scythians who took it first to China.** The Indian Vedas sang of Cannabis as one of the divine nectars, able to give man anything from good health and long life to visions of the gods. The Zend-Avesta of 600 B.C. mentions an intoxicating resin, and the Assyrians used Cannabis as an incense as early as the ninth century B.C. Inscriptions from the Chou dynasty in China, dated 700-500 B.C., have a negative connotation that accompanies the ancient character for Cannabis, Ma, implying its stupefying properties.

Since this idea obviously predated writing, the Pen Tsao Ching, written in A.C. 100 but going back to a legendary emperor, Shen-Nung, 2000 B.C., may be taken as evidence that the Chinese knew and probably used the hallucinogenic properties at very early dates. It was said that Ma-fen (Hemp fruit) if taken to excess, will produce hallucinations [literally, `seeing devils']. If taken over a long term, it makes one communicate with spirits and lightens one's body.

A Taoist priest wrote in the fifth century B.C. that Cannabis was employed by necromancers, in combination with Ginseng, to set forward time and reveal future events. In these early periods, use of Cannabis as an hallucinogen was undoubtedly associated with Chinese shamanism. By the time of European contact 1500 years later, shamanism had fallen into decline, and the use of the plant for inebriation seems to have ceased and had been forgotten. Its value in Chine then was primarily as a fiber source.

There was, however, a continuous record of Hemp cultivation in China from Neolithic times, and it has been suggested that Cannabis may have originated in China, not in central Asia. About 500 B.C. the Greek writer Herodotus described a marvelous bath of the Scythians, aggressive horsemen who swept out of the Transcaucasus eastward and westward. He reported that they make a booth by fixing in the ground three sticks inclined toward one another, and stretching around them woolen pelts which they arrange so as to fit as close as possible. Inside the booth a dish is placed upon the ground into which they put a number of red hot stones and then add some Hemp seed...immediately it smokes and gives out such a vapor as no Grecian vapor bath can exceed; the Scythes, delighted, shout for joy....

Only recently, archaeologists have excavated frozen Scythian tombs in central Asia, dated between 500 and 300 B.C., and have found tripods and pelts, braziers and charcoal with remains of Cannabis leaves and fruit.It has generally been accepted that Cannabis originated in central Asia and that it was the Scythians who spread it westward to Europe. While the Greeks and Romans may not generally have taken Cannabis for inebriation, there are indications that they were aware of the psychoactive effects of the drug.Democritus reported that it was occasionally drunk with wine and myrrh to produce visionary states, and Galen, about A.D. 200, wrote that it was sometimes customary to give Hemp to guests to promote hilarity and enjoyment.

While there is no direct mention of Hemp in the Bible, several obscure passages may refer tangentially to the effects of Cannabis resin or Hashish. It is perhaps in the Himalayas of India and the Tibetan plateau that Cannabis preparations assumed their greatest hallucinogenic importance in religious contexts.Bhang is a mild preparation: dried leaves or flowering shoots are pounded with spices into a paste and consumed as candy -- known as maajun -- or in tea form. Ganja is made from the resin-rich dried pistillate flowering tops of cultivated plants which are pressed into a compacted mass and kept under pressure for several days to induce chemical changes; most Ganja is smoked, often with Tobacco. Charas consists of the resin itself, a brownish mass which is employed generally in smoking mixtures.

The Tibetans considered Cannabis sacred. A Mahayana Buddhist tradition maintains that during the six steps of asceticism leading to his enlightenment, Buddha lived on one Hemp seed a day. He is often depicted with Soma leaves in his begging bowl and the mysterious god-narcotic Soma has occasionally been identified with Hemp.In Tantric Buddhism of the Himalayas of Tibet, Cannabis plays a very significant role in the meditative ritual used to facilitate deep meditation and heighten awareness.

Note: The writer is a non-smoker!